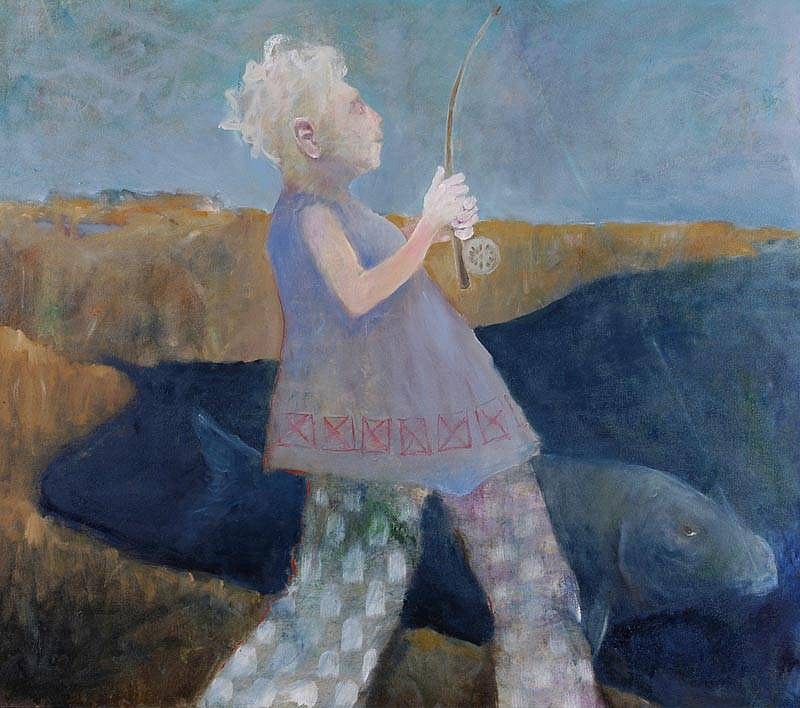 Brief history and statement about my work: I was born in Spokane Washington in 1933.  I studied at Eastern Washington University, Fort Wright College and the Spokane Arts Center (an extension of Washington State University).

My early paintings were abstract expressionist for the most part and gradually evolved into my present style as I felt the need to more precisely communicate my thoughts.  My method of painting, however, has not changed, and I still approach a painting in the same way.  I begin a painting with no idea in mind, and at a certain point in the process of putting paint on the canvas, an idea will suggest itself.  Many of these ideas change and many are rejected until one seems strong enough to accept.  My paintings, then, are essentially a record of the evolution of an idea.

The imagery that has developed over the course of my career is largely figurative.  The figures are both animal and human, and most of them relate to human actions, associations and relationships, many of which are drawn from personal experience.

My technique has evolved through years of painting, as has my imagery.  I paint directly on the sized canvas, with no preliminary drawing or outline.  The paint is poured, dripped, rubbed and wiped, and I use rags and my fingertips at least as frequently as I do brushes.  The decisions made concerning color, light space etc. are largely intuitive.

The color is treated generally by under painting with warm colors overlaid with cooler ones.  This technique gives an inner glow to the paint.  I use mostly single figures, either animal or human forms, with a strong relationship between the figure and the background (usually a light figure against a dark ground or vice versa).  I find a single figure to be more visually powerful than groups of figures; consequently most of my paintings consist of single subjects.  Many times the image gives the appearance of being back lighted with the light glowing around the edges.  The light is usually ambiguous, appearing to come from more than one source or no definable source whatsoever.

My justification for forty years of work is that I am trying to put something worthwhile into the world and to make paintings that cannot be forgotten.