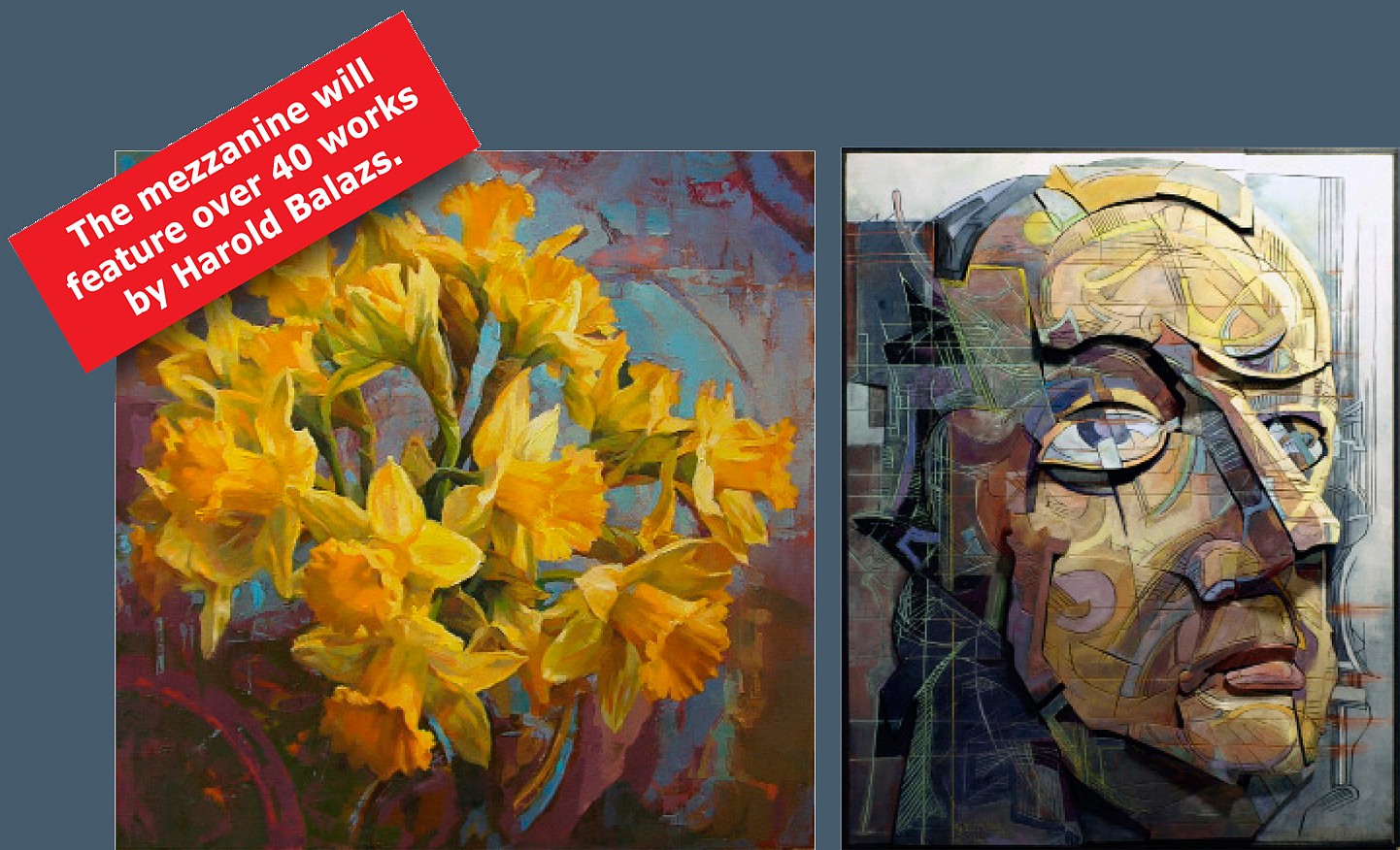 Join The Art Spirit Gallery on Friday, June 10 for ArtWalk and the Opening Reception for Spokane artists Victoria Brace & Robert Grimes. Meet the artists and view their latest works. Also as part of this show, over sixty works by Harold Balazs will be showcased in the mezzanine of the gallery.  Enjoy a lively evening of fine art, fine dining and good friends in Downtown Coeur d’Alene. Everyone is welcome!

The show runs from June 10 through July 2 and is sponsored by The Bluebird – A Midtown Eatery.  We thank owners Viljo and Autumn Basso for their fine restaurants and continued support of the arts.

Victoria and Robert will give an informal demonstration and discussion of their work starting at 1:00 on Saturday, June 11.

Raised and educated in Russia, Victoria Brace relocated to Spokane in the 1990s and has been sharing her craft with audiences in this region since. She is well-known for her hauntingly beautiful local landscapes and cityscapes, figurative and still life works.  Brace’s figurative pieces are drawn from an internal point of reference, rather than directly from a model. She studies the faces of people she meets and then recaptures their essence from memory. Her formal education at the Moscow College of Art gives her a strong foundation from which to begin her improvisational process.

”I start a painting with a visual story in mind - it's mostly the mood, the movement, the play of colors and shapes that I want to capture on canvas, usually no narrative at this point. It's rarely a straightforward process, most of my paintings are layers of images, where things get added or painted out, some many times over, until I hit just the right ‘note’ - it can be a certain color combination, a silhouette, even just a brush stroke, but when it happens, it feels true and it acts as a tuning fork for the rest of the painting. In short, I make things up, and then I paint them so they'd feel real. Memories, observations, thoughts and experiences combine in my mind, and the images form.”

Brace’s cityscapes of Spokane are treated like portraits. She believes cities have personalities, distinctive moods, structure, and rhythm. “After a long period of time, a place develops its own character; there are enough layers of history, events, different aesthetics accumulated, so a city becomes similar to a living organism,” she says.

This year’s exhibit includes some pieces with the theme of “bizarre carnival and masquerade characters,” as the artist puts it, which grows naturally from her painting process. This theme has occurred many times over the years, but for this show, she embraced it; it allowed her the freedom to tell a visual story without the confinements of realism.

Fifty years of exploration in the studio has produced a lifetime’s body of work that is at once finely crafted and conceptually driven. Robert Grimes' journey began in 1981 after picking up a sketchbook in order to “re-learn how to draw,” and he has since developed a unique and disciplined practice. Beginning each time with what he calls “automatic drawings,” Grimes begins to explore the sub-conscious, tapping into inspiration from Freud and Jung. He avoids literal depictions as long as he can, but eventually, “things come out.” He feels that a piece has been successful when the viewer is unable to articulate the aesthetic experience in words.

Born and raised in Colorado, Grimes graduated from the University of Denver with a BFA in painting and from Indiana University with an MFA in sculpture. Since retiring from a career in jewelry design 1998, he has been able to devote his full attention to an already thriving practice. He has had 11 solo exhibitions and has participated in 25 group shows at The Art Spirit Gallery in the last nineteen years.

Grimes is adept in the use of a wide variety of media that allows him to experiment, almost scientifically, in a search for the materials and processes that will best communicate to the viewer. “My goal is simple – make an original expressive experience without describing one. I like to give clues to unexplainable mysteries within my work and make imagery believable enough to draw one into what is not believable.”

Like his work, Grimes’ artistic style is free from boundaries. Formal education, cultural influences, and the long-standing practice of Automatic Drawing are consistent elements of Grimes’ work as an artist. His choice of medium and the shape of his characteristically sculpted canvases are proof of his endless innovation. His goal has been to discover a sculpting medium and method that can be worked as intuitively as his drawings.

…also in this show…Harold Balazs

As a bonus to this month's show, we will feature over 60 works by local icon Harold Balazs in the mezzanine.  At 87 years young, Uncle Harold is still producing. There will be over 20 new works and various pieces from the past, some dating back to the 1950s. The Art Spirit Gallery has been proud to represent Balazs since 1997.

Balazs describes his life’s work with these words:  “I make stuff because it is better than not making stuff.”  Fortunately for Balazs faithful followers and collectors, this prolific artist is still making stuff.

In the Northwest, Harold Balazs is a household name.  And for those who have explored the region in the past six decades, chances are great they’ve been touched by his large-scale public art pieces that populate plazas, schools, parks, libraries, government offices, and college campuses.  Metal sculptures, concrete reliefs, enamel murals, walls of carved wood and brick reflect the breadth of the artist’s creativity and decorate cities throughout Washington from Seattle to Spokane.  Others dot the landscape in Oregon, Alaska, Montana, and Idaho.

Perhaps his most famous pieces are found in Spokane in Riverfront Park, former site of Expo ‘74. Chosen as the primary artist for the world’s fair in 1974, Balazs created a 32-foot sculpture derived of twenty concrete panels and patterned after a Japanese lantern that dazzles visitors and illuminates at night. Centennial Sculpture, a curious and playful tangle of stainless steel completed in 1982, floats in the Spokane River. Balazs’ latest masterpiece for the park is the giant Rotary Fountain, a series of sprinklers and spouts supported by five 24-foot steel columns he co-created in 2006. Also famed as a leading liturgical artist, Balazs has created art – including carved doors and altars, enamels, and stained glass - for more than two hundred churches and synagogues in the region since the 1950’s, including Spokane’s St. Charles Borromeo Catholic Church and Unitarian Universalist Church.

Balazs can take responsibility for public art in Washington in more ways than one.  Shortly after earning his bachelor degree of arts from Washington State University in 1951, where he was viewed as one of the top students of his program, Balazs served three terms on the Washington State Arts Commission and helped establish the Art in Public Places Program (AIPP) that facilitates the acquisition, placement, and stewardship of artwork in state-funded building projects throughout Washington.  To date, more than 4,500 artworks are sited throughout the state for public enjoyment thanks to AIPP.

An Icon he is.  Over his extensive and productive career as an artist, Balazs has received notoriety throughout the country and has been honored with a plethora of prestigious awards, including the American Institute of Architects Gold Medal for Architectural Craft, the Creative Achievement Award from the Enamellist Society, the Seattle Metal Guild Lifetime Achievement Award and an honorary doctorate from the Gonzaga University School of Law.  His work is displayed in the Smithsonian American Art Museum.  And in 2001, Lloyd Herman, founding director of the Smithsonian’s Renwick Gallery, hand selected Balazs for Northwest Designer Craftsmen’s Living Treasures video series. Also, Balazs’ contributions to the field were celebrated in a major retrospective exhibition in 2010 organized by the Northwest Museum of Arts and Culture and documented in a 160 page book published by the University of Washington Press.

Born in Westlake, Ohio, a short distance from Cleveland, Balazs learned the art of metal working from his father, a sheet-metal worker and air-conditioning repairman.  His mother, a woman who valued the arts, enrolled the budding artist in art classes at the Cleveland Museum of Art.  Here Balazs became enamored with enamel panels and vowed to practice the same art form one day.  And that he did.  Today Balazs resides on seven acres of paradise in Eastern Washington with Rosemary, his wife and devoted art assistant of 65 years.