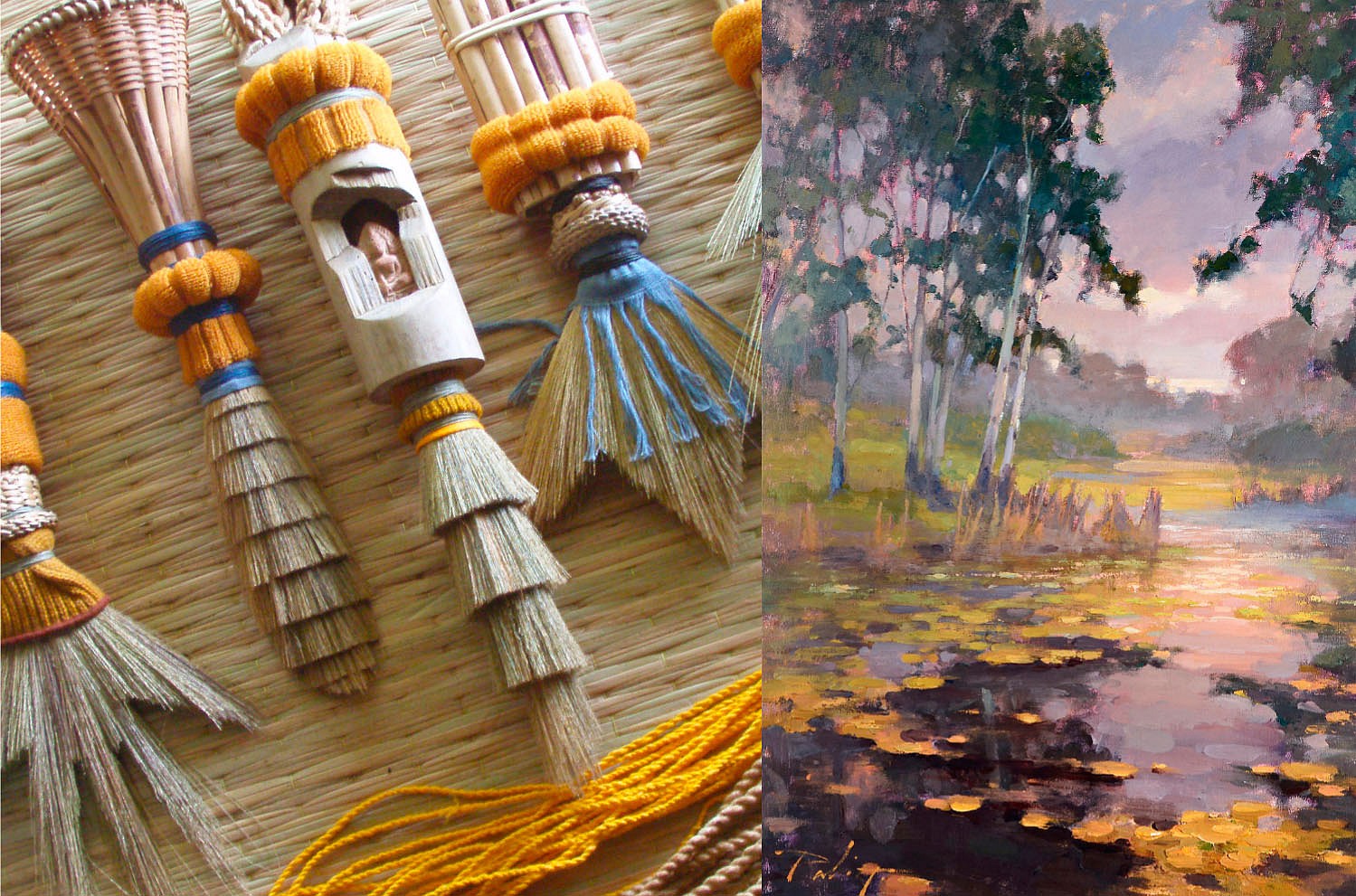 OPENING RECEPTION & ARTWALK will be on Friday, July 11 from 5-8 pm.

This show runs from July 11-August 3.

The artists will give an INFORMAL TALK & DEMONSTRATION in the gallery on Saturday, July 12 starting at 1pm.  These events are free and open to the public.

DONATION TO HOSPICE OF NORTH IDAHO
This show in particular embodies a special meaning for Glenn Grishkoff after his recent brush with hairy cell leukemia, a form of cancer.  As a gesture of gratitude and contribution to the continuing advancement of treatment for others, the artists and gallery are donating 10% of the sales of their work during the show to Hospice of North Idaho.

GLENN GRISHKOFF was raised watching his Chinese-born Russian father grind his own ink and paint the glyphs from his childhood. Grishkoff’s own experience in Asia and Thailand taught him the power of a brushstroke and the spirit of natural materials. Through the creation of sculptural objects and performances using clay, paper, wood, metal, textiles and hair, he references the history of the specific materials he uses. Ultimately, the works reflect human experience and pay homage to the animal spirit instilled in the physical world.

Grishkoff has chosen the brush as a thematic device for his art.  As a former professor of art at the University of Idaho and during his numerous workshops throughout the United States, he teaches an artist's way of making brushes from ceramic and found materials.  The metaphor is extended when he uses his brushes to create. In this show Grishkoff demonstrates his range of skill, based on Japanese calligraphic training; in the creation of animistic figures; in the voice of a hawk feather as it traces a spiritual circle or in his large Zen-inspired wall hangings.

For twenty years Grishkoff has exhibited artworks nationally and internationally accepting invitations to work and exhibit in Japan, South Africa and Thailand.  He was a Senior National Guest Resident at the Oregon College of Art and Craft and at the Shigaraki Cultural Ceramic Park in Japan.  In Thailand he was the Chiang Dao Artist Resident, collaborating with the painting elephants and creating sculptures among the hill tribe people. He has traveled extensively, giving lectures at The Mashiko Museum of Art in Mashiko, Japan and The International Workshop of Ceramic Art in Tokoname, Japan. In 2008, Grishkoff was awarded the Idaho Commission on the Arts fellowship grant.  He earned a BFA from California State Fullerton and an MFA from the Claremont Graduate University and currently maintains a studio practice in Palm Desert, CA.

Oil painter KYLE PALIOTTO gathers imagery from the beautiful rustic landscape of his local surroundings in North Idaho. He searches out rural settings which display a time gone by when harmony between land and man existed.  His style is one that takes from impressionism without disregarding the discipline of representational art up to the early 1900's.  Painting plein air on location is essential to his process, but the real meat and potatoes is in the studio.

At the age of 39, Kyle has had some great achievements, but his greatest joys are his wife Rebecca and children Vincent and Sophia.  His successes include:  Signature Status with the American Impressionist Society, Juried into multiple Oil Painters of America National and regional shows, Winning Honorable Mention in the 13th Annual American Impressionist Society National Show (2012) and also in the Portrait Society of America’s Members Only competition (2010), Best of Show at the CM Russell Auction in Great Falls, Montana (2010) and winning Third Place in American Impressionist Society's 11th Annual National Show (2010).  Kyle has been written about in Southwest Art Magazine’s “Artists to Watch” (2008) (2013) and a feature article in Western Art Collector Magazine (2009) (2010) and (2013).

Life is just getting exciting and Kyle looks forward to a long rewarding career.